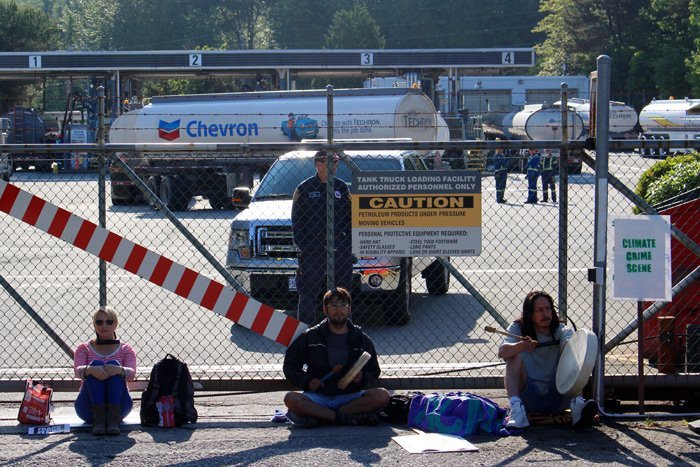 A message from Dan Wallace:

just got out of the tank.

Thank you to everyone that came to support us and bring food that was so awesome. Thanks for everyone that spread the word that was so dam kool.
Would like to thank those from New York that sent love to us by ordering a pizza for us that was the best.

AGAIN THANK YOU ALL FOR SUPPORTING Mia Nissen, Adam Gold, and myself. All three of us know that this is just the beginning so let’s keep it up.

Thank you for all the food that you all brought to that was so dam awesome.

It’s all over with for now. At approximately 10:30pm the three protesters who were chained to the Chevron station gate, Dan Wallace, Mia Nissen and Adam Gold were arrested. The police cordoned off the growing crowd, draped the protestors with protective blankets, then sawed off the bike locks while sparks shot into the air. To the chants of “if you ship it – we will stop it, if you build it, we will block it”, the crowd cheered as the arrested finished their day’s work, and were led into police vehicles. This observer will remember the silent resolve the three maintained throughout the day until the final moments, the seriousness of the intension behind their motives, the humour that provided relief as the day wore on.

The optics of the situation made the power relations in our present society transparent. The beautiful but increasingly threatened Vancouver/Burnaby landscape was the backdrop; the bright blue sky hid the invisible knowledge that greenhouse gases are building and leading to catastrophic changes in weather systems. In our midst, the gated fossil fuel corporation stands seemingly invulnerable to attempts to respond to threats to the very existence of humanity. The state, in the form of police and the judge’s injunction, comes to defend corporate interests. Business-as-usual and the corporation’s proft imperative in the form of a steady train of fossil fuel delivery is to be protected above all else.

On the side of humanity and nature are the good people being arrested, those in the audience, and all the allies expressing support throughout the day. Risking their daily routine, their reputation with coworkers or aquaintances, or possible financial penalty, they soldier on throughout the day in the shared understanding that this is a time of clarity, of vitality, of being awake to ourselves as people and as community. We will remember the words of one of the arrestees. “We can do this. We are doing this now”.

Good night, comrades. Thanks for following this story. Until tomorrow…B.H.

Update III: Activist chained to Chevron’s fence are still calling for pizza, see second update for details. We’ll let you know if you need to redirect your orders to the local Burnaby jailhouse, but for now they’re holding strong. Here they are refusing an order to desist.

The irony should not be lost that Chevron handed out free coupons for pizza to fracking victims in Pennsylvania not long ago.

Update II: EMERGENCY CALL FOR PIZZA. Anti-fracking activists are still chained to the fence of Chevron’s facility in BC and they are getting hungry! Help give them the nutritious fuel they need to fight fossil fuels. Call Stan’s Pizza Joint now and show solidarity by placing an order for a New York-style pie: 604-298-5711.

Here is the delivery address: 4403 Eton Street, Burnaby, BC.

Update: Scroll to the bottom of this page for on-the-scene interviews with activists chained to the gates of the Chevron facility in British Columbia.

Vancouver Media Coop – Early Friday morning the 30th of May 2014, three activists (Dan Wallace, Mia Nissen and Adam Gold) locked themselves to the gate of Chevron in North Burnaby to protest exploitative resource extraction in Canada. They used bicycle D-locks and chains to secure themselves to the metal posts of the gate to stop truck traffic into the Chevron North Burnaby in order to draw attention the Federal and Provincial government’s complete disregard for the earth, Indigenous sovereignty, and the reality of climate change.

The activists are not associated with any organizations but are ordinary citizens that have decided that enough is enough. “We want to demonstrate the extreme measures that ordinary citizens are willing to take. We want to show that each person has the ability to act, and that we must act for the sake of ourselves and future generations. Like many others taking a stand, we feel a moral obligation.” stated one of the activists.

Many studies have been conducted on the reality of climate change and the links to destructive industrial practices. One study partly funded by NASA’s Goddard Space Flight Center, claims that industrial civilization is heading for a collapse within decades if drastic changes are not made. Meanwhile, with the Provincial government balancing their budget on predicted revenue from fracking and the Harper government’s extensive spying on environmental groups, there seems no indication that the people in power are willing to make these changes. The activists have stated that they intend to stay until Chevron and their partners withdraw all permit applications and stop all construction on the Pacific Trail Pipeline project.

“It’s time to stop the insane expansion of fossil fuel projects. If we look at the facts these projects don’t make any sense for the future; environmentally or economically. That’s why we’re locking down today; to show how these companies are holding us all hostage to a poisoned future. We might not get off our oil and gas addiction overnight, but it’s time to tell our government to fund alternative and renewable energy sources and take responsibility for our shared futures.