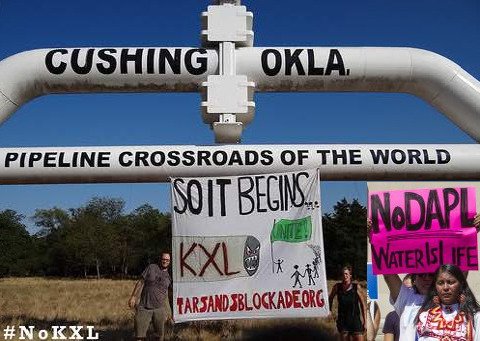 Black Snakes on the Move: U.S. Pipeline Expansion Out Of Control

A Lakota prophecy tells of a mythic Black Snake that will move underground and bring destruction to the Earth. The “seventh sign” in Hopi prophecy involves the ocean turning black and bringing death to many sea-dwelling creatures. It doesn’t take an over-active imagination to make a connection between these images and oil pipelines and spills.

It’s troubling enough that the growing “Black Snake” has branched out at an alarming rate, forming a massive subterranean coast-to-coast web. But to make matters worse, the nefarious reptile seems to suffer from leaky gut syndrome, so that it functions as a toxic underground sprinkler system, spreading gas, oil, and poisonous by-products everywhere it goes – including into waterways and drinking water sources

Protest actions against major pipelines such as the Keystone XL and Dakota Access Pipeline (DAPL) have called attention to the potentially devastating effects of pipelines, but much of the general public still doesn’t understand the scope of the existing and proposed pipeline network in the U.S. and around the globe. Executive actions by Donald Trump just four days into his presidency practically guarantee expedited approval for DAPL, as well as for Keystone XL. This indicates, among other things, that the maze of oil and gas pipelines in the U.S. will continue to expand at an unprecedented and reckless pace.

The U.S. is already home to approximately 2.5 million miles of underground gas and oil pipeline. For the sake of comparison, only one other country exceeds 100,000 pipeline miles: Russia, with 161,502 miles. Canada places third, with just over 62,000 miles of pipeline, and all other countries fall far below that, with most containing fewer than 10,000 pipeline miles.

Over 72,000 miles of the U.S. conduits carry crude oil, and more than 20 pipelines directly threaten Native lands. The reach of the “Black Snake” is mind boggling, especially considering that every one of these pipelines has already contributed to or is almost certain to contribute to the ongoing devastation of Mother Earth.

Effectively opposing new pipelines and pipeline extensions will require the active participation of thousands, if not millions, of determined citizens. Water is necessary for the life of every person on the planet, and the seriousness of the current situation compels each and every one of us to become involved to the greatest extent feasible.

The Dakota Access Pipeline remains a serious threat, not only to the water supply and sacred lands of the Standing Rock Sioux, but to all waterways and lands along the pipeline’s 1,200-mile path through North Dakota, South Dakota, Iowa, and Illinois. This monstrosity is an environmental disaster waiting to happen. The heroic water protectors at Standing Rock have achieved much, but now the ground they’ve gained must be fought for all over again. With the stroke of a poisonous presidential pen, Trump has already managed to betray both long-standing treaty and recent agreement, bringing dishonor and disgrace on the U.S. government while jeopardizing water supplies and planetary well-being.

The proposed Mountain Valley Pipeline (MVP), which has an anticipated construction start date of mid-2017, will – if allowed to proceed – carry fracked natural gas from the Marcellus and Utica shale regions along a route beginning in northwestern West Virginia and ending in southern Virginia, with a detour into Pennsylvania. Objections to the project include the conduit’s proximity (one-tenth of a mile in some places) to two major water supplies and countless residential wells. The MVP would cross 377 bodies of water, the Appalachian Trail and the Blue Ridge Parkway, and could adversely affect thousands of acres of forest habitat.

Pipeline Crossroads of the World

The Diamond Pipeline, which was approved in August of 2016, is intended to transport “sweet” crude oil from Cushing, Oklahoma, across Arkansas, to the Valero Memphis (Tennessee) Refinery. Along the way, the Diamond will cross the Arkansas River, the Illinois Bayou, the White River, St. Francis River, and the Mississippi River.

One of the most disturbing aspects of the Diamond Pipeline is its point of origin. Cushing, Oklahoma, is the self-proclaimed “Pipeline Crossroads of the World,” a title proudly announced on signs placed at the entrances and exits to the town, which was once a part of the Sac and Fox reservations. The “tank farm,” which occupies several square miles, is one of the largest oil storage facilities in the world, and thirteen major pipelines run into and out of the busy hub.

As if pipeline leaks and spills weren’t enough cause for concern, the area surrounding Cushing has recently become incredibly earthquake prone, thanks to the large number of waste-water injection wells. The U.S. Geological Survey reports 825 earthquakes of a 1.5 magnitude or greater in the Cushing area between January 14, 2016 and the same date in 2017, with an alarming 5.8 record-setter in nearby Pawnee in September 2016. If Arkansas water protectors do not succeed in halting construction, the Diamond Pipeline will add one more spoke to Cushing’s mammoth oil storage hub, and will become a major conduit spreading pollution and potential devastation across Arkansas, a state that has for years been promoted as “the Natural State.”

Each of the planned, proposed, and under-construction pipelines listed above is deserving of strong opposition, as are the many other pipelines still in the planning and approval stages. Why? Because they are dangerous, as evidenced by the number of leaks, spills, and explosions.

In the six-year period between 2010 and 2016, 4215 pipeline incidents occurred. The Pipeline and Hazardous Materials Safety Administration reports that pipeline accidents between 2010 and 2015 were responsible for a total of 7 million gallons of crude oil being leaked into surrounding soil and waterways, and the as-yet-untallied quantities lost in 2016 and early 2017 incidents will add significantly to that total. Many of the existing pipelines are old and poorly maintained, and for some reason, the newer pipelines are even more accident prone.

Human error causes some of the pipeline accidents, while natural occurrences are responsible for others. In 2013, for example, lightning struck a pipeline in North Dakota, causing 840,000 gallons of crude oil to spill onto a nearby wheat field. One wonders what will happen when the ongoing swarm of fracking-related Oklahoma earthquakes damages the Cushing oil storage tanks or the pipelines connected to the facility.

Oil pollutes the water and land, sickens, and kills. Natural gas contributes to climate change, pollutes the air, and explodes. Oil and gas pipelines create temporary jobs for a relative few and permanent jobs for a small handful.

In the long run, the only people who benefit financially from the “Black Snake” are the already wealthy oil corporations. The oil industry gives new meaning to the term “filthy rich,” while individuals living near petrochemical plants contend with chronic respiratory illnesses and high rates of cancer. With so many clean, green energy sources ready to be put into place, there is no reason to allow the Lakota legend of the planet-destroying Black Snake to become a permanent and fatal reality.

The turnaround will not happen easily. In fact, it will be quite a struggle. Greed is strong, and the oil corporations wield unreasonable power – and now they have even more friends in high places, including the one who may as well be referred to as the CEO of the USA. But the previous halting of the Keystone XL, and the tenuous and seemingly temporary victory at Standing Rock have proven that it is indeed possible to make a difference with determination and solidarity.

The frightening number of proposed pipelines and the fact that those pipelines will likely receive swift approval make it clear that the battle for Mother Earth is indeed a war. This war cannot be won by an unknown, faceless “them,” because there is no “them.” There is only us, and each and every one of us is needed – now. •

Teressa Rose Ezell is a St. Louis writer and activist. She and her family live in the Tower Grove South neighborhood, where she was her district’s Green Party candidate for the Missouri House of Representatives. This article first appeared in greensocialthought.org website.