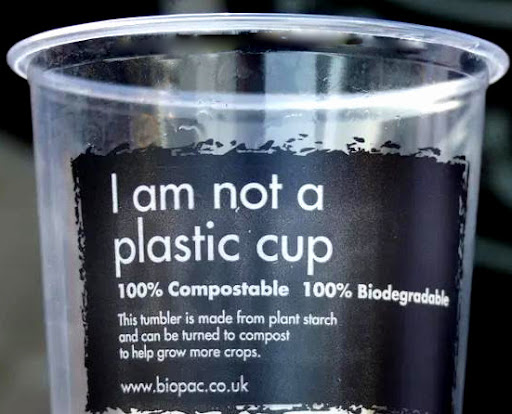 Do the promise and hype add up to a viable alternative?

People say they want less plastic in their lives. As the push against plastics has grown in recent years, the worst plastic-polluting corporations (including Coca-Cola, PepsiCo, Nestlē, Danone, Procter & Gamble, Unilever, Mars Inc., Colgate-Palmolive) have been scrambling to find viable biodegradable replacements for their wasteful single-use items. A number of new plastics have been introduced. Called bioplastics, they are being marketed as eco-friendly and “the next step in plastic.”

Contrary to the companies’ claims, they do not break down as promised. So let’s break down the concept and explain why bioplastics are neither a current nor future panacea.

Two very confusing terms from the bioplastics industry are biobased (at least partly composed of recently living matter) and biodegradable (capable of being broken down by microbes). While both sound environmentally beneficial, each comes with substantial drawbacks.

Bethany Jorgensen, a researcher at Cornell University’s civic ecology lab, uses a widely recognized symbol of overlapping circles that represent relationships to describe the difference between biobased and biodegradable.

“It’s like a Venn diagram,” she says. “Some of these new plastics are biodegradable. Some of them are biobased. Just because they are biodegradable doesn’t mean that they are 100% coming from non-petroleum sources. A lot of them use at least some percentage of fossil fuel-derived chemicals as part of their makeup. And just because some are biobased plastics doesn’t mean they are necessarily going to biodegrade faster than conventional plastic.”

Industry association PlasticsEurope defines biobased plastics as those that are wholly or partially made from “natural” sources, such as sugarcane or cornstarch, and indistinguishable outside a laboratory from petroleum-based conventional plastic.

Biodegradable plastics can be decomposed by the action of living organisms — usually microbes like fungi and bacteria — into water, carbon dioxide, methane, and biomass, under specific conditions. However, these specific conditions vary greatly, meaning many plastics will not degrade naturally, as in a backyard or even a community-based composting facility. To further complicate matters, plastics that are frequently called biodegradable, such as polylactic acid (PLA), by industry and even sometimes by advocates for recycling and composting, are degradable but not by living organisms; thus calling them biodegradable is misleading.

Adding to the confusion, because biodegradable plastics can be either biobased or petrochemical-based with biodegradable additives, they can’t be mixed in a composting or recycling facility.

Plant-based biodegradable plastics must be separated from petrochemical-based plastics if they are to be recycled. This makes it very difficult for the average person to keep from dropping the wrong item in a bin and thus contaminating an entire batch. And when these biodegradable plastics are thrown in the compost, it can take up to 10,000 years for them to decompose under normal circumstances — that is, outside one of the few high-intensity composting facilities in North America, which require many acres of space. At the moment there are only 112 such facilities in the entire United States.

The inability for most biodegradable plastics to rapidly degrade in nature, Jorgensen says, keeps bioplastics from being an environmentally sound replacement for the fossil-fuel products that are clogging our landfills, our oceans, and our own bodies.

“Biodegradable technology is pretty limited,” she explains, “in the sense that it’s not very available, it only biodegrades in very controlled circumstances, and if it’s not at the right temperature and humidity and whatever, then chances are it will persist just as long in the landfill or the environment where it ends up.”

Marine biologist Christine Figgener, director of science and education at the Footprint Foundation, the nonprofit arm of a sustainable technology firm focused on reducing or eliminating plastics through new technologies, says, “There’s a lot of greenwashing going on [in biodegradable plastics].” The Footprint Foundation, she explains, “wants people to be aware of that and be educated enough to recognize when they are being cheated by big companies.”

PLA, one of the most popular ingredients in current bioplastics, is based on cornstarch. Much of the corn in the United States is genetically modified (GM). This, coupled with the rising demand for the crop as the basis for the biofuel ethanol, has led to greater industrial corn production, and thus to greater use of fertilizers — which has led to increases in waterways pollution from excess nitrogen and phosphorus runoff. Furthermore, corn is a very water intensive crop, adding to stressors in areas of the country that have been seeing their groundwaters deplete faster than they can recharge.

Adding a bioplastic use for corn is, says Figgener, “not really a solution if we are also considering climate change in the whole equation, which we definitely have to.”

Adding biobased or biodegradable plastic products to the avalanche of fossil-fuel-based plastic is rather like adding factory wind farms to the energy grid without removing an equal amount of fossil-fuel-based energy. This seems more a money-making scheme for some than a way to check the advance of the plastic platoon into Earth’s every crevice.

“We have to come up with better solutions,” Figgener asserts. “It’s as easy as that. The easy fixes are not going to do it anymore.”