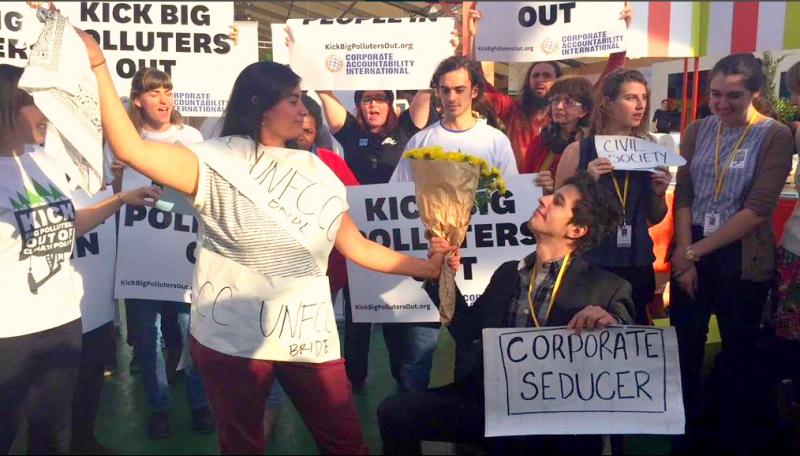 Joined by System Change Not Climate Change, a global coalition of climate justice groups has issued a set of demands to the world governments assembling in Sharm El Sheik, Egypt, for COP27, the United Nations’ largest climate gathering of the year.

The group’s statement identifies capitalism as destroying life as we know it and calls for Big Polluters to be kicked out of the annual UN conference that they have corrupted for the past 26 years.

The coalition’s statement has been signed by more than 425 organizations comprising a cross-section of the global movement for climate, economic, and social justice.

To world governments ahead of COP27:

The climate crisis is no longer on our doorsteps; it is here and now. Around the world, we are already experiencing irreversible damage to the planet, and the loss of homelands, cultures, ecosystems, and more – all of this on a daily basis. And it is the communities around the world that have contributed the very least to climate change that are paying the highest price–their lives and livelihoods.

We are living in a climate crisis, not because it was inevitable or unavoidable. Rather, we have witnessed world governments protect Big Polluters’ interests and fail year after year to deliver the needed climate equity and action to end the world’s fossil fuel addiction, and to rapidly and justly transition to a new global system – one that is equitable, socially just, gender responsive, nature-restoring, fossil-fuel-free, and life affirming.

We have witnessed world governments– particularly the U.S., EU, Norway, Canada, Australia, and New Zealand – cause countless delays and obstruct so many opportunities to meaningfully act. They have continued the legacy of racism, patriarchy, extractivism, and colonialism year after year, protecting the greed and profits of Big Polluters that continue to pillage and plunder from frontline communities with impunity.

We know who is to blame for the climate crisis. For over half a century, Big Polluters have known their deadly products would cause tremendous harm. What did they do? They hid the truth, sowed doubt, and invested billions of dollars to delay climate action. All in the name of greed and profits, no matter the cost to people and the planet. Why do you continue to support and enable them every step of the way?

We, the more than 425 organizations representing millions of people around the world, ask you– what do you stand for? Do you stand for the obscenely greedy, reckless, and deadly business practices of Big Polluters that have driven us to the brink of extinction? Or do you stand for a world where communities can thrive and where we protect and nurture the planet Earth that is our only home?

Ahead of COP27 happening in Sharm El Sheikh in November 2022, we demand:

1. No more writing the rules.

Big Polluters must not be granted access to climate policymaking. This allows them to continue to unduly influence, weaken, and undermine the global response to climate change, and it’s why we are on the brink of extinction. The United Nations Framework Convention on Climate Change must urgently establish an Accountability Framework to end this corporate capture. As an immediate next step, beginning with COP27, all participants must be required to publicly disclose and declare their interests. People deserve to know who is at the policymaking table, and what their real agenda is.

No Big Polluter partnership or sponsorships of climate talks or climate action. Not now. Not ever. Major polluters must not be allowed to greenwash themselves and literally buy their way out of culpability for a crisis they have caused. Already, two major polluters have been named as COP27 partners- Coca-Cola, the  world’s largest plastics polluter and a major political blocker of action; and Microsoft, the world’s largest tech partner to the oil and gas industry. The UNFCCC will always fail to deliver so long as this is deemed acceptable.

3. Polluters Out- People In.

While civil society has always participated in the COP process, governments have made it more difficult each time for NGOs and climate justice movements to have their voices heard. We need equitable, meaningful inclusion. Climate action must center the leadership and lived experience of the people, especially those on the frontlines of the climate crisis. With frontline communities in the lead, we must end the funding and validation of dangerous distractions and false solutions that promote Big Polluters’ profits, enable their abuses, and guarantee decades more of fossil fuel use.

Capitalism is destroying life as we know it. It’s time to build a new way of living and collaborating that works for people, not polluters, and that restores, rather than destroys, nature. We need real, just, accountable, gender responsive, community-led, nature-restoring, and proven and transformative solutions to be implemented rapidly and justly. We need a total and equitable transition off of fossil fuels. We need real solutions that center the rights of Indigenous peoples, local communities and the protection of those speaking up for justice. We need an end to the impunity of corporate abuses.