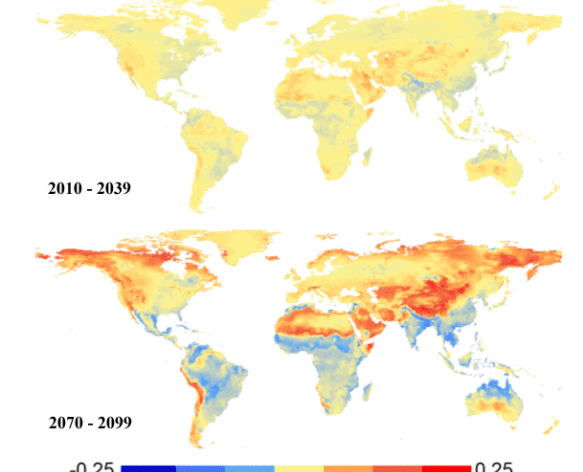 Besieged by the Fires of Denial — Fort McMurray Blaze Overwhelms Anzac, Shuts off 640,000 Barrels per Day of Tar Sands Production

The simple fact of the matter, a fact that many invested in a destructive oil industry do not want to now face, is that a fire whose early-season extreme intensity was fueled by human-caused climate change is now doing what Canada would not. It is shutting in oil production in the tar sands — one of the highest carbon fuels on planet Earth.

(Increases in fire frequency due to climate change as predicted by model runs are illustrated in the map above. According to a report at WeatherUnderground — “A large increase in fires over much of the globe is expected as we move through this century. Using fire models driven by output from sixteen climate models used in the 2007 IPCC report, researchers found that 38% of the planet should see increases in fire activity [due to climate change] over the next 30 years. This figure increases to 62% by the end of the century.” Image source: Climate Change and Disruptions to Global Fire Activity.)

There are other facts that need to be faced as well. One is the fact that Fort McMurray and all its residents have had their lives put at risk by a new kind of fire that is now much more likely to occur. A kind of event that will tend to emerge with a rising frequency and intensity. One that is increasing the risk of harm to those living throughout Canada, throughout the Arctic and throughout much of the world.

It’s a tough truth to face. One that many Canadian politicians confronting the impossible task of balancing the demands of oil-based economic interests with the very clear need to mitigate climate change are having difficulty coming to grips with. But one that must be seriously looked at and not ignored by everyone concerned for the safety of those living in Fort McMurray and everywhere else. For unless the greenhouse gasses from the burning of fossil fuels like the tar sands stop hitting our atmosphere, then these kinds of events will just keep getting worse.

For we are already starting to see terrible wildfire events of the kind we have never before experienced emerging in the Arctic and in sections of Northern North America. For with the world now 1 C warmer that 1880s averages, large Arctic wildfires are now ten times more likely to occur. And in Alaska — a region that shares climate trends with Canada — the length of the fire season has grown by 40 percent since the 1950s.

Across the globe, the story is much the same. Heating of our atmosphere by burning fossil fuels is increasing fire frequency and intensity. A point that even conservative IPCC projections have been attempting to impress upon policy-makers since the early 1990s (see graphic above). And, in significant part, this rising danger has been contributed to by the tar sands fuels Fort McMurray’s energy industry was designed to extract.

(A study by Climate Central last year found that warming in Alaska had resulted in a lengthening of the fire season by 40 percent and that the pace of large fire generation had increased by tenfold [x10]. It’s worth noting that climate and foliage in Alberta, British Columbia, and the Northwest Territories are very similar to those in Alaska. And increasing fire intensity and frequency due to warming in Alaska is also impacting the Canadian fire regime as well. Image source: The Age of Alaskan Wildfires.)

Despite the risky and harmful policy choices driven by the fossil fuel industry in Canada, we should not be callous to the loss and dislocation many within the tar sands production zone are now enduring. It’s a tragedy. Plain and simple. Thousands of people have lost their homes and livelihoods. But we should not allow ourselves to be blinded to the reality of the situation simply due to the fact that it is an oil community, this time, suffering from the ravages of extreme climate conditions. For thousands of Canadians are now joining a growing pool of climate change refugees. Victims of and, some of them, contributors to a catastrophe born out of an oil-industry spread hubris and blindness. An event that shines a light on the continued and increasing risks posed by tar sands extraction and on the vulnerability of that harmful fuel’s economic underpinnings to the very climate forces it is now starting to set loose.

Yesterday, as firefighters scrambled to protect the Fort McMurray city center and northern outliers, a massive fire besieging the city boiled and grew. Pushed back from its north-bound progress into neighborhoods along the Athabasca River, toward the barren tar sands extraction area, and into the water treatment plant by firefighting efforts, the fire swelled as it retreated. Turning to the south and east, it began to encroach upon the city’s airport even as one of its offshoots exploded toward the well-populated suburb of Anzac 30 miles to the south.

There, an emergency operations center had just set up after being forced to move from its downtown location when a rain of embers cast out from the pyrocumulus cloud looming over the city set its roof to smoldering. The new operations center was well away from the projected northbound path of the blaze. And officials had some reason to believe the recently-moved center would be safe. A southern evacuation center — housing hundreds of people now rendered homeless by the fire — was also set up in the area.

By Wednesday afternoon, the airport, the Anzac community, the newly moved emergency operations center, and the evacuation center all fell under the shadow of a swelling pyrocumulus. A great storm of smoke, ash and burning embers thrown up from the heat of the blaze beneath. All in this area were forced to evacuate (a good number for the second time in as many days) as the huge cloud grew and the fires advanced.

As night fell, smoke shrouded the airport — blocking it from view. And many firefighters already knew the community of Anzac would be lost.  Sean Amato tweeted this message Wednesday evening as the fire advanced — “Firefighter [says], ‘Anzac is f**cked. We can’t fight that. We have no bombers. Get out now.’”

By Thursday, a massive area stretching from the airport to Anzac had been abandoned to the fire. Greatly adding to the 10,000 hectares the huge blaze was estimated to have burned as of noon Wednesday by expanding the fire more than 8-fold to 85,000 hectares — an area six times the size of San Fransisco.

At this point, fires had displaced so many workers and crippled so much infrastructure that tar sands production in the region came to a grinding halt. As of early Thursday morning more than 640,000 barrels per day of the climatologically volatile synthetic crude had halted. Representing more than 16 percent of Canada’s crude production, the fire-forced cuts were significant enough to drive oil prices in the global markets as high as 46 dollars a barrel in trading earlier today. More production shut ins were likely with other major tar sands extractors scrambling to slash oil flows as the Fort McMurray blaze became ever-less predictable. Near Anzac, the southern extent of the fires threatened a 30,000 barrel per day Conoco Philips tar sands production facility in the Surmont region — forcing a production halt and the evacuation of all tar sands workers.

A wind shift to the north along with the influx of cooler temperatures on Thursday may help firefighters gain some progress. Conditions over the region today are cloudy with 10-15 mph winds out of the northwest and temperatures around 64 (F). However, little to no rain fell over the area as a front swept through this morning. Meanwhile, thermometer readings are expected to climb into the middle 80s again on Saturday with very dry conditions taking hold.

To this point, it is only May — not July when such extreme fire weather would typically be possible. Average temperatures for Fort McMurray tend toward the upper 50s or lower 60s this time of year. So even today’s readings of 64 F are warmer than usual with temperatures predicted to rocket to 20-25 F above average again by Saturday. Given this trend, and given the fact that it will grow still hotter and drier in the months ahead, it looks like Fort McMurray — a city in the grips of the hard climate consequences it helped to create — is in for a long, rough fight.

The Age of Alaskan Wildfires

Here’s the Climate Context for the Fort McMurray Wildfire

The Impact of Climate Change on Wildfires