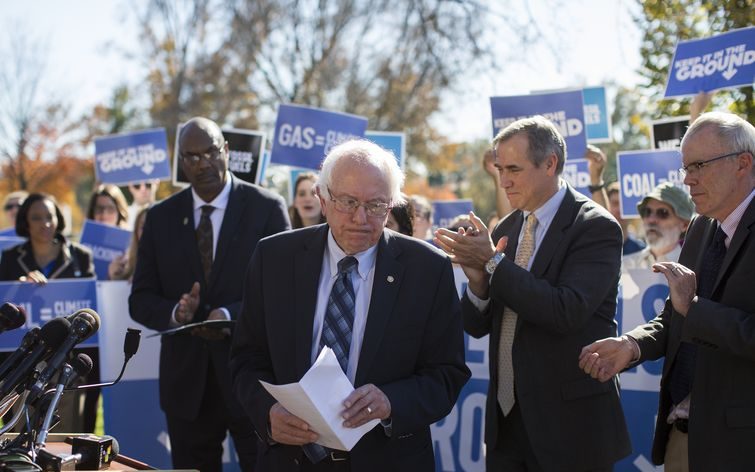 As I wrote last week in a post on supply-side climate policy … there isn’t much of it so far. Plenty of governments have been willing to pass legislation that would reduce demand for fossil fuels (by boosting renewables or imposing energy efficiency standards, for example). But few have been willing to choke off fossil fuel extraction as an explicit strategy for addressing global warming. These projects tend to have extremely vocal constituencies, making them a bit of a political third rail.

Now a couple of US senators are trying to shift the conversation.

Sens. Jeff Merkley (D-OR) and Bernie Sanders (I-VT) have just introduced the Keep It In the Ground Act, a short but potent bit of legislation that would effectively lock up fossil fuel reserves on US public land.

Specifically, it would (quoting from the bill summary):

I chatted with Merkley about the bill today, and he stressed the “climate math” — most famously detailed by Bill McKibben — which shows that limiting global warming to 2°C will require that some 80 percent of proven global fossil fuel reserves remain unburned.

“Of the proven reserves in the world,” Merkley said, “10 percent of them are on American publicly owned land.” What’s more, he said, decisions about those reserves reverberate, because “leases are often worked for decades into the future, 20, 30 years for gas, up to 50 years for coal.” Such decisions are simply not compatible with the rapid conversion away from fossil fuels that is necessary, he said.

Indeed, as Katie Valentine writes, the question of US fossil fuel reserves is no small matter from a carbon perspective:

Fossil fuels from public lands already make up a significant portion of the United States’ carbon emissions: according to a Center for American Progress and Wilderness Society report, oil, coal, and gas taken from federally-owned lands and waters are responsible for more than 20 percent of the country’s total greenhouse gas emissions. According to one Bureau of Land Management report, 279 million acres of federal lands in the U.S. contain an estimated total of 31 billion barrels of oil and 231 trillion cubic feet of natural gas.

It’s simply not tenable to nibble away at demand while ignoring that supply, Merkley said. “We have to attack it from every direction.”

How a bill becomes a conversation starter

Merkley is under no illusions that the bill will become law any time soon, or even come to a vote in a body controlled by Republicans. He cited as early co-sponsors “Sanders, [Barbara] Boxer, [Ben] Cardin, [Kirsten] Gillibrand, [Patrick] Leahy, and [Elizabeth] Warren,” but added ruefully, “up here on Capitol Hill, too many votes are locked up by the Koch brothers. They really have a firm grip on the US Senate.”

But Merkley hopes the introduction of the bill will spur conversations among legislators, in the US and in other countries, and among the grassroots movement that did so much to put supply-side policy on the agenda. And he hopes the question might play a bigger role in the presidential election, where thus far climate change has been all but invisible.

Finally, and perhaps most significantly, he hopes a supply-side push might “create pressure on the administration,” where Obama has executive control over a great deal of leasing policy. (A group of senators recently wrote Obama asking him to factor carbon costs into coal leasing decisions on federal lands.)

Though supply-side climate policy is currently rare in policy discussions, Merkley is convinced that “we’re on the front end of a global conversation. You’re starting to see people think not just about what they consume, but what they produce.”

And beyond the practical effects of the bill, or of supply-side policies generally, lurks a bigger question.

“There’s a moral dimension to this,” Merkley emphasized. “America was a leader in building a fossil fuel energy economy. We need to be a leader in helping drive the transition off fossil fuels. But how can you be a leader when you are not managing your public assets for public good but selling them for private gain?”