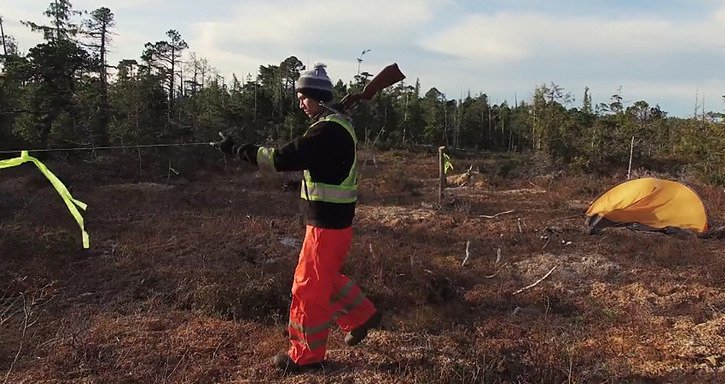 Amanda Stanley, “science program officer” for the Seattle-based Wilberforce Foundation, headed up to Prince Rupert a couple of weeks ago to check on one of her projects.

That would be the camp on Lelu Island where a splinter group of Tsimshian tribal members and supporters maintain an effort to blockade and disrupt testing required for an environmental permit application to construct a liquefied natural gas terminal.

Stanley tweeted a picture from the camp, looking past a Mohawk warrior flag at the coastline. “So inspired by these defenders of land, water and salmon,” she wrote.

Wilberforce, the California-based Gordon and Betty Moore Foundation, Hawaii-based Sustainable Fisheries Partnership and others have poured money into anti-LNG campaigns in B.C., as they funded opposition to oilsands development before them. Indeed, the record suggests the long project to establish what environmental front groups named the Great Bear Rainforest was a strategy to stop hydrocarbon exports from western Canada, even as U.S. sources ramped up production.

So what’s been going on at this “science program” on Lelu Island? Its own multi-media promotion material provides some glimpses, featuring sweeping allegations and efforts to block scientific evaluation with crude threats and intimidation.

One man, identified as Donald Wesley Jr., walks the island with a rifle over his shoulder. Among his claims is that the drilling isn’t for testing, but is actually the start of construction on the Pacific Northwest LNG terminal, which still awaits a decision from the Trudeau cabinet.

Then he describes his preparations.

The video series is co-produced by a fellow named Tamo Campos, identified as a representing “Beyond Boarding,” with a link to an expired website.

Campos came to prominence in B.C. protest circles during the recent oil pipeline standoff at Burnaby Mountain. He appeared with his grandfather David Suzuki and other well-known protesters in a carefully choreographed show of entering a court-ordered restraining zone and briefly being arrested.

Again, they were interfering with authorized scientific testing while attempting to create the impression for media of grassroots opposition.

Wesley, his father Donald Wesley Sr. and a supporter from Hartley Bay named Matthew Danes, claim to represent hereditary chiefs. In June, a dozen Tsimshian hereditary chiefs and elders issued a letter stating that Wesley Sr. “took it upon himself to occupy Lelu Island solely on his own accord” and doesn’t represent the community.

“We do not appreciate Mr. Wesley inviting environmental militants and outsiders into our territory without the respect and manners dictated by the protocols of our ayaawyx [laws],” they wrote.

The Canadian Environmental Assessment Agency and the B.C. Environmental Assessment Office required Pacific Northwest LNG to consult with five aboriginal communities. The Metlakatla, Kitselas, Kitsumkalum and Gitxaala bands have benefit agreements for the project signed or in progress. The lone holdout, Lax Kw’alaams, elected a new council last fall that embraced the project with conditions.

And 40 Lax Kw’alaams students just graduated from pre-apprentice training sponsored by the provincial and federal governments and the UA Piping Industry College of B.C.