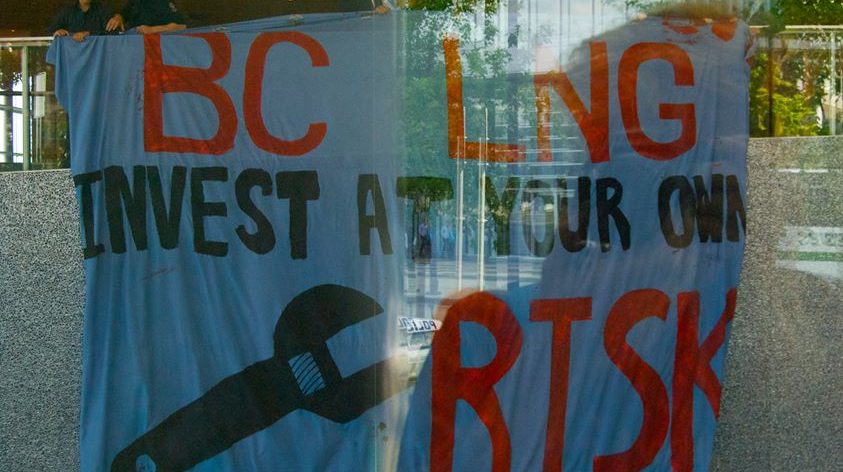 Banner unfurled at International LNG in BC Conference

Members of Rising Tide – Coast Salish Territories gained access to the second annual International LNG in BC Conference to warn major business players about the risks of investing in Liquified Natural Gas in British Columbia. The infiltrators unfurled a banner measuring 15 feet by 25 feet that read “BC LNG: Invest at your own RISK.” It was dropped from the main floor of the Vancouver Convention Centre just prior to Minister of Natural Gas and Housing Rich Coleman’s opening address. The action was done in solidarity with grassroots land defenders across the province, where widespread resistance on the ground and in the courts is making BC hostile territory for foreign businesses. Rising Tide spokesperson, Chandra Tung said “It’s easy to feel complacent and secure about your investment when you’re being wined and dined at the Vancouver Convention Centre, but folks up north on the ground know, LNG infrastructure will never be built.  Rich Coleman and Christy Clark are leading foreign investors down the garden path.”

LNG is touted as a clean energy alternative, but in reality, multiple studies show natural gas has a carbon footprint larger than even coal. LNG extraction is destructive to land, water and communities, and will accelerate climate change beyond repair. James Anaya, UN Special Rapporteur on the Rights of Indigenous Peoples, recently told the federal government of Canada that developing shale gas in BC would be in direct contravention of First Nations constitutional right to free prior and informed consent. Between Treaty 8 First Nation’s resistance to the Site C dam that would fuel the LNG industry, the Fort Nelson First Nation’s ejection of government officials from their land, and the Unist’ot’en camp standing in the pathway of proposed natural gas pipelines, BC’s proposed trillion-dollar LNG industry is nothing but a bad investment.