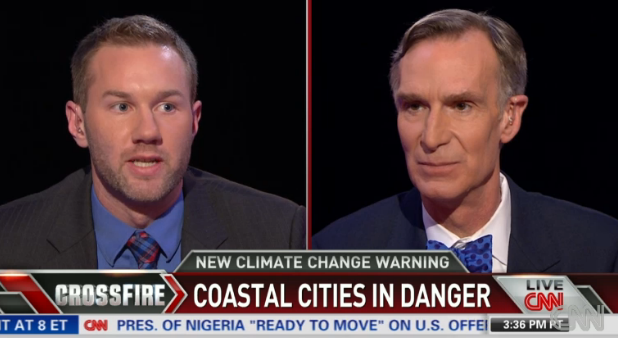 The CNN left/right debate show Crossfire was off for a while last month, apparently because there’s no way to “debate” the search for a missing plane. The show returned this week, and Tuesday’s show (5/6/14)  illustrated another issue that should be considered beyond the realm of the “both sides” TV debate: climate change.

You may have gotten a sense of the show’s direction from the announcement at the top: “What’s worse for America’s economy: the dangers of climate change or the solutions?” Obviously, Loris–whose specialty is evidently economics–was going to argue the latter.

His employer has been a key player in the climate change denial industry; as Media Matters (11/28/11) documented, Heritage was arguing in 2010 that the “only consensus over the threat of climate change that seems to exist these days is that there is no consensus.” The organization has received funding from the likes of ExxonMobil and the Koch brothers.  Loris himself worked at the Charles Koch Charitable Foundation before moving over to Heritage in 2007.

Loris, like others in the climate “skeptic” crowd, was quick to point out that he’s no denier:

I’m not a denier. I’m not a skeptic. What I’m saying is climate is changing, yes. Man-made emissions are some part of that, but we haven’t seen these extreme weather event trends. The observed data doesn’t prove that.

But for someone who’s not a climate change denier, he sure sounded like one–claiming that “we’ve had Arctic ice globally increasing,” that “prohibiting building of new coal-fire power plants is just going to make us less equipped…to handle these problems,” and arguing that “we’ve had this 16-to-17-year hiatus in warming that the climate model has predicted.”

As Mother Jones‘ Chris Mooney (5/7/14) pointed out, the ice talking point is highly misleading. (Skeptical Science offers a good explanation.) The supposed pause in global warming is similarly deceptive (FAIR Blog, 10/1/13); average global surface temperatures have been climbing upwards since the 1950s. The supposed “pause” has been concocted by starting the clock at 1998, an unusually warm year (though not the hottest on record; 2005 and 2010 were both hotter).

So for someone who’s “not a denier,” Loris sure sounds a lot like one. This gets back to the problem with these “debates” over climate change, which elevate a marginal, industry-backed viewpoint to more or less equal standing with the overwhelming scientific consensus.

It’s enough to make you wish Crossfire would take another break–or at least decide that the climate crisis demands an entirely different sort of debate. Given that this isn’t the first time they’ve done this–earlier this they were debating whether a cold snap would “put the climate change debate in the deep freeze” (FAIR Blog, 1/8/14)–it’s hard to have high hopes.