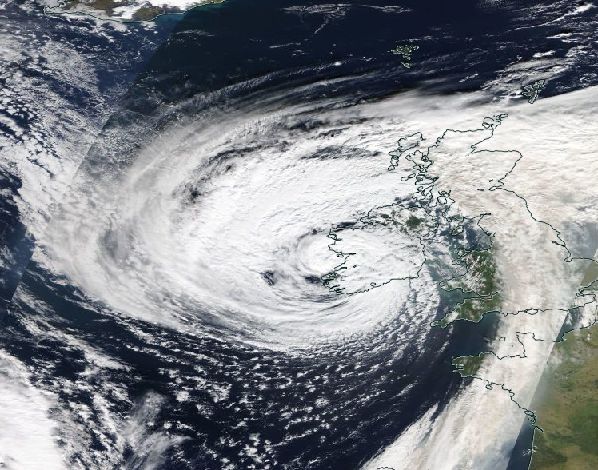 “Ophelia is breaking new ground for a major hurricane. Typically those waters much too cool for anything this strong. I really can’t believe I’m seeing a major just south of the Azores.” — National Hurricane Center scientist Eric Blake wrote on Twitter.

Warmer than normal ocean temperatures due to human-forced climate change are now enabling hurricanes to threaten Northern Europe. A region that was traditionally considered out of the range of past Atlantic Ocean hurricanes under 20th Century climatology. One that, in a warmer world, is now under the gun.

On October 14, Ophelia hit major hurricane status as it moved swiftly toward Europe. Packing 115 mph maximum sustained winds over a region of ocean where we’ve never recorded this kind of powerful storm before, Ophelia set its sights on Ireland. Crossing over warmer than normal North Atlantic Ocean waters, the storm maintained hurricane status up to 12 hours before barreling into Ireland. At that time, cooler waters caused the storm to transition to extra-tropical. But this transition was not enough to prevent Ireland from being struck by hurricane-force gusts up to 119 mph, storm surge flooding, and seeing structural damage reminiscent to a category one storm.

360,000 power outages and two deaths were attributed to a storm that should have not maintained such high intensity so far north and east. Yet another historic storm that forced the National Hurricane Center to shift its tracking map east of the 0 degree longitude line (Greenwich) since they had never planned for a hurricane or its tropical remnants to move so far out of the typical zone for North Atlantic hurricanes (see image at bottom of page).

As with many of the recently powerful storms, 1 to 2 degree Celsius above average sea surface temperatures were a prime enabler allowing Ophelia to maintain such high intensity so far north. And under the present trend, it appears that the Atlantic coasts of Spain, Portugal, France, Ireland and England are now all more likely to see tropical storm and hurricane impacts in the future as sea surface temperatures continue to rise.

The present Atlantic hurricane season can now only be described as a surreal caricature of what we feared climate change could produce. Texas, Florida, Puerto Rico and a dozen or more Caribbean islands are now devastated disaster areas. Some locations may feel the effects of the off-the-charts powerful storms enabled by a warmer than normal ocean for decades to come. Puerto Rico, unless it receives far more significant aid from the mainland than the Trump Administration appears to be willing to provide, may never fully recover.  And now Ophelia has maintained hurricane status until just twelve hours before striking Europe’s Ireland as a powerful extra-tropical storm.

2017 has also been an extraordinary year basin-wide by measure of storm energy. Total accumulated cyclone energy (ACE) for the North Atlantic as of October 15 was 222.5. So far, according to this measure, 2017 is the 7th strongest hurricane season ever recorded since records began in 1851. The most intense season, 1933, may see its own record of 259 ACE exceeded over the coming days and weeks. For storms still appear to be forming over record warm waters. According to the National Hurricane Center, a disturbance off the East Coast of the United States now has a 40 percent chance of developing into the season’s 16th named storm over the next 48 hours. Meanwhile, during recent years, powerful late October storms like Matthew and Sandy have tended to crop up over warmer than normal ocean waters even as late season storms ranging into November and December appear to be more common. In other words, we’re not out of the woods yet and 2017 may be a year to exceed all other years for total measured storm intensity as well as overall damage.