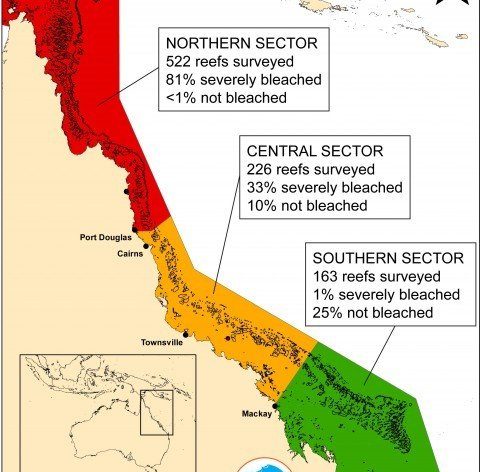 ‘And then we wept’: Scientists say 93 percent of the Great Barrier Reef now bleached

The conclusions are in from a series of scientific surveys of the Great Barrier Reef bleaching event — an environmental assault on the largest coral ecosystem on Earth — and scientists aren’t holding back about how devastating they find them.

Australia’s National Coral Bleaching Task Force has surveyed 911 coral reefs by air, and found at least some bleaching on 93 percent of them. The amount of damage varies from severe to light, but the bleaching was the worst in the reef’s remote northern sector — where virtually no reefs escaped it.

“Between 60 and 100 percent of corals are severely bleached on 316 reefs, nearly all in the northern half of the Reef,” Prof. Terry Hughes, head of the ARC Centre of Excellence for Coral Reef Studies at James Cook University, said in a statement to the news media. He led the research.

Severe bleaching means that corals could die, depending on how long they are subject to these conditions. The scientists also reported that based on diving surveys of the northern reef, they already are seeing nearly 50 percent coral death.

“The fact that the most severely affected regions are those that are remote and hence otherwise in good shape, means that a lot of prime reef is being devastated,” said Nancy Knowlton, Sant Chair for Marine Science at the Smithsonian Institution, in an email in response to the bleaching announcement. “One has to hope that these protected reefs are more resilient and better able to [recover], but it will be a lengthy process even so.”

Knowlton added that Hughes, who led the research, is “NOT an alarmist.”

Here’s a map that the group released when announcing the results, showing clearly that bleaching hit the northern parts of the reef the worst: