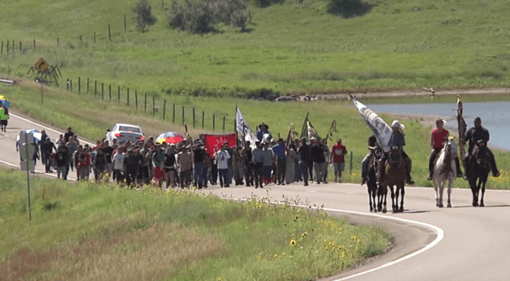 Among the Pipeline Fighters in Central Iowa

“There is a time,” Mario Savio famously said just more than half a century ago, “when the operation of the machine becomes so odious, makes you so sick at heart, that you can’t take part; you can’t even passively take part, and you’ve got to put your bodies upon the gears and upon the wheels, upon the levers, upon all the apparatus, and you’ve got to make it stop.”

That’s easier said than done, but you’ve got to make a start.

Take the hideous long black Earth-poisoning and planet-baking snake that is the Bakken Pipeline. Beneath the cover of the endless presidential election season, which in Iowa started a year and a half ago, the Texas-based company Dakota Access LLC (a division of the corporation Energy Transfer Partners [ETP]) has moved methodically ahead with its plan to build this ugly, winding, and eco-cidal tube of death. The $4 billion, 1134-mile project would carry 540,000 barrels of largely fracked crude oil from North Dakota’s “Bakken oil patch” daily on a diagonal course through South Dakota, a Sioux Indian burial ground,18 Iowa counties, and a Native American reservation to Patoka, Illinois. It will link with another pipeline that will transport the black gold to terminals and refineries along the Gulf of Mexico.

Last March, five weeks after Bernie Sanders (who opposed the pipeline) essentially tied Hillary Clinton in the Iowa Caucus, the corporate-captive Iowa Utilities Board (IUB) approved the giant Iowa portion of the project, granting Dakota Access eminent domain across the entire route. It was the company’s last major administrative hurdle for Dakota Access.

The IUB’s decision last March was rich with Orwellian irony. Iowa law forbids the condemning of agricultural land for private development. It is true, as Dakota Access argues, that the law excludes utilities under the jurisdiction of the IUB from the private development limitation. And that includes pipelines, if they serve a “public purpose.” But the pipeline would simply transport oil through Iowa and therefore serves no discernible public good for the state and in fact promises to do considerable harm to the state’s environmental and financial health. Opponents rightly point out that like all pipelines, it will eventually spill, and Dakota Access, LLC will leave Iowa holding the bag for the cleanup. Like something out of Kafka, the IUB will have no power to enforce any kind of public regulations whatsoever on the operators of the private interstate pipeline they approved as a “public utility.”

The IUB’s decision was another example among many that Iowa is up for sale to Big Business under the right wing administration of Republican governor Terry Branstad.

The stakes are high. “If the Bakken Pipeline is built,” the progressive lobbying and activist organization Iowa Citizens for Community Improvement (CCI) notes, “it would seriously harm Iowa’s already impaired water quality, threaten the integrity of the fertile farmland of thousands of everyday Iowans, and contribute to our dependence on fossil fuels. This steers us away from developing renewable energy infrastructure and curbing the most catastrophic impacts of climate change.”

No small problem, that. By all scientific and lived experiential indications, anthropogenic – really capitalism-o-genic – global warming is pushing the planet at an ever escalating pace to full-on ecosystem collapse.

The IUB decision and the federal governments’ failure to intervene against the pipeline have helped DA bring in a significant capital infusion from the giant Canadian pipeline company Enbridge and from Marathon Petroleum. The two corporations recently put up $2 billion ($1.5 billion from Enbridge and $500,000 from Marathon to purchase 49 percent of the Bakken Pipeline. A likely consequence should the project be completed is that Canadian tar sands oil will flow through the pipeline and Iowa and toward the Gulf Coast. That oil is one of the most carbon-rich, planet-cooking fossil fuels on Earth. Dire environmental concern about the mining of Canadian tar sands oil was the main reason that climate activists like Bill McKibben engaged in high-profile protests of the proposed Keystone XL Pipeline – a leading news story a few years ago.

Here in Iowa, anti-pipeline activists have been playing by all the official local, state, and federal rules. They’ve gone through the established channels of law and procedure. They’ve worked the legal and regulatory machinery to the point of exhaustion. They’ve gone through all available avenues of reason and petition. They’ve written and delivered carefully worded petitions and given polite, fact-filled testimony to all the relevant public bodies. They’ve appealed to the IUB. They’ve appealed to the Army Corps of Engineers and to numerous other federal agencies and offices including the Environmental Protection Agency, the Advisory on Historic Preservation, and the U.S. Department of Transportation’s Pipeline and Hazardous Material Safety Administration. They’ve sued in court, defending farmers’ traditional American-as-apple-pie private property rights. Along the way they’ve presidentially caucused for Sanders (who denounced the pipeline in some of his Iowa speeches and advertisements. They’ve reached out to Hillary Clinton, who switched from pro- to anti-Keystone Pipeline for campaign purposes (but who nonetheless cozies up to leading fracking companies) after leaving her position as U.S. Secretary of State. They give citizens a flyer asking them to call the White House and tell Barack Obama that “This is the new Keystone XL. You can stop this pipeline. You must stop this pipeline.”

And it’s all been for naught because the state is stuck in the deep pockets of Big Carbon. Last week a long-awaited district court ruling in Des Moines gave DA, ETP, Enbridge, and Marathon and their big financial backers what they wanted. DA is free to complete construction on fifteen parcels where the farm owners had challenged the state’s right to enforce eminent domain on behalf of the Bakken snake. Construction crews composed disproportionately of out-of-state workers (contrary to DA’s claim that the pipeline meant a jobs windfall for Iowans) are now working feverishly to lay as much pipe as they can before landowners’ challenge can perhaps make it to the Iowa Supreme Court (where DA will win) – and before cold weather sets in. Many hundreds of acres of lush topsoil and nearly harvest-ready crops are being torn up along the pipeline’s sinister path as I write these words.

All of which has brought Iowa activists to the conclusion that while scientific evidence and legal arguments are useful and necessary, direct citizen action in defiance of corporate-rigged law and “regulation” is required to save our water, land, and livable ecology. Yesterday (I am writing on the afternoon of Thursday, September 1st, 2016), more than 100 activists connected to CCI and the anti-pipeline groups Bold Iowa and One Hundred Grannies for a Livable Future undertook civil disobedience at four entrance to a DA construction staging ground in Boon County in central Iowa. Twenty-eight of those activists were arrested and taken away by Iowa state troopers for the crime of trespassing – blocking the movement of DA vehicles.

Here is an eloquent and short speech given just prior to the direct people’s action by the leading environmental lawyer Carolyn Raffensperger:

“When the law is far apart from justice, the law must fall. “

“A law that allows the private property of landowners to be taken… and given to a polluting pipeline company – that law must fall.”

“To allow the pollution of our drinking water is insane. It is not just. The law that would allow that must fall. “

“This is an illegitimate pipeline. Any kind of vote, any kind of ratification that allows that must fall. Justice must prevail.”

The indomitable Maria Kashia, a leader of One Hundred Grannies for a Livable Future, spoke with equal passion and eloquence prior to the arrests:

“We are here to defend and protect. We are here out of love for our earth and future generations.”

“We are not here to hate. We are here because of the illegitimate ant-democratic process that has created this great threat to rivers and our soil.”

“We are here in solidarity with our Native American brothers and sisters to stop the black snake that threatens their water and ours.”

“We are here because we are informed about the undeniable reality of the climate crisis that is already destroying life on our planet home.”

“We are watching as the glaciers melt. Oceans heat and rise. People die of heat and starvation due to drought. Great fires burn our forests all over the planet. And floods wash away communities and lives.”

“We know that those Dakota Access workers need jobs. We want clean green jobs for them. And we are working very hard toward that.”

“But this pipeline is not going to serve the common good. This pipeline will destroy, pillage, pollute, and plunder for profit, not for people and nature.”

“‘It is horrifying,” Ansel Adams once wrote, ‘that we have to fight our own government to save the environment.’”

Words, like science and law, are useful but then there’s the realm of deeds: the stoppage of the assembly or killing line, the burning of the draft cards, the occupation of the university administration building, the refusal to participate in war crimes, and the blocking of pipeline construction trucks enlisted in pillage, pollution, and plunder for profit, not the common good.

Let’s be very clear and honest about what we are up against here and around the world. Big Carbon and 21st century petro-capitalism are literally engaged in the Greenhouse Carbon-gassing to death of life on Earth. That is a bigger crime than even those of the Nazis, many whose top commanders justly hanged at Nuremberg.

I suppose I have some political and philosophical differences with some of my fellow pipeline opponents in Iowa. I’m more Marxist and also more anarchist and Edward Abbey-ite and less pacifist in background and spirit than many of them. But these differences do not feel all that terribly big or relevant right now. I have the greatest respect and admiration for the Iowa pipeline fighters who have put their freedom and bodies on the line for the common good – and for their many comrades fighting the petro-capitalist pillaging of the planet across the country and world. You can donate to the legal defense of these social and environmental heroes and heroines here.