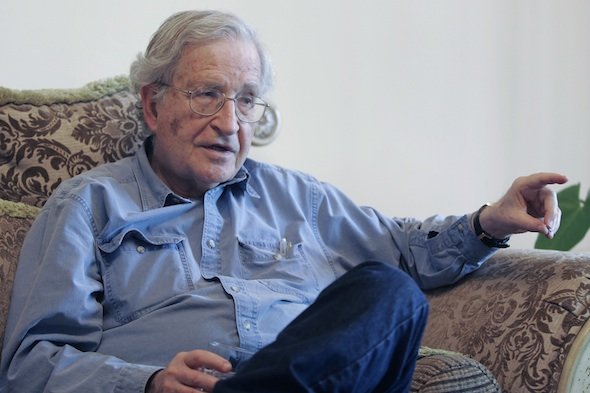 CAMBRIDGE, Mass.—Noam Chomsky, whom I interviewed last Thursday at his office at the Massachusetts Institute of Technology, has influenced intellectuals in the United States and abroad in incalculable ways. His explications of empire, mass propaganda, the hypocrisy and pliability of the liberal class and the failings of academics, as well as the way language is used as a mask by the power elite to prevent us from seeing reality, make him the most important intellectual in the country. The force of his intellect, which is combined with a ferocious independence, terrifies the corporate state—which is why the commercial media and much of the academic establishment treat him as a pariah. He is the Socrates of our time.

We live in a bleak moment in human history. And Chomsky begins from this reality. He quoted the late Ernst Mayr, a leading evolutionary biologist of the 20th century who argued that we probably will never encounter intelligent extraterrestrials because higher life forms render themselves extinct in a relatively short time.

“Mayr argued that the adaptive value of what is called ‘higher intelligence’ is very low,” Chomsky said. “Beetles and bacteria are much more adaptive than humans. We will find out if it is better to be smart than stupid. We may be a biological error, using the 100,000 years which Mayr gives [as] the life expectancy of a species to destroy ourselves and many other life forms on the planet.”