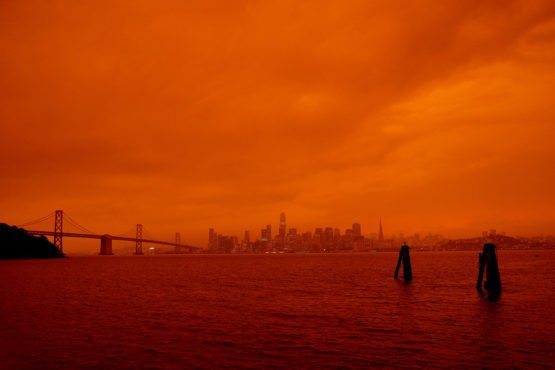 As IPCC warns of a world on the brink of catastrophe, can we force change in time?

Grassroots leaders of the global climate movement said Monday that the latest grave findings issued by the Intergovernmental Panel on Climate Change represent yet another call to action that can’t be ignored if billions are to be saved from catastrophic extreme weather, pollution, and other impacts of continued fossil fuel use.

“The report makes very painful reading,” said Kaisa Kosonen, senior policy adviser at Greenpeace Nordic, said in a statement. “But only by facing these facts head-on, with brutal honesty, can we find solutions that match the scale of the interconnected challenges.”

“It’s all hands on deck now! We need to do everything faster and bolder, at all levels, and leave no one behind,” Kosonen added. “The rights and needs of those in the most vulnerable conditions must be placed at the heart and center of climate action. This is the moment to rise up, think big, and unite.”

The IPCC’s comprehensive new report—signed by 270 scientists from nearly 70 countries around the world—represents the United Nations body’s bleakest assessment yet of the state of the climate, which is warming at an untenable pace due to the burning of fossil fuels, leading to more intense extreme weather, loss of biodiversity, as well as humanitarian crises such as increased displacement, poverty, and malnutrition.

The sweeping analysis of the latest scientific research warns that human-caused climate change has already inflicted “substantial damages” on the world’s marine ecosystems and forests. Additionally, the report notes that “the occurrence of climate-related food-borne and water-borne diseases has increased” as the planet continues to warm largely unabated.

“The findings of the IPCC report we are releasing today are clear: the stakes for our planet have never been higher,” Hoesung Lee, chair of the IPCC, said during a press conference on Monday.

Climate advocates echoed that message and emphasized that while some of the damage done to the environment is irreversible, there’s still time to prevent the worst-case warming scenarios—but the window of opportunity is closing rapidly.

“It is a disgrace that decades of cowardly decisions by rich industrial nations have led us here, to the brink of climate catastrophe laid bare in this latest IPCC Assessment Report,” Meena Raman of Friends of the Earth Malaysia said in a statement Monday, condemning the efforts of rich nations—the largest emitters of greenhouse gases—to water down the language of the report.

“The United States in particular must accept its role in creating the climate impacts we’re experiencing right now,” added Raman.

“We will hold to account those whose actions have disproportionately damaged our planet. They broke it, now they have to fix it.”

In the coming days, climate leaders in Africa, Indonesia, Brazil, Canada, France, and elsewhere are expected to hold demonstrations and other actions aimed at pressuring world leaders to take bold action to slash planet-warming greenhouse gas emissions. The worldwide actions will culminate in a global climate strike, led by the Fridays for Future movement, on March 25.

“The time for vague discussions about offsets and technological fixes to produce ‘clean’ coal, oil, and gas is over,” Tzeporah Berman, Stand.earth’s international programs director, said in a statement Monday. “We can stop the worst impacts but it requires bold new ideas like the Fossil Fuel Treaty and immediate commitments from wealthy countries to stop the expansion of oil, gas, and coal, protect intact forests, and support emerging economies to build electrification and renewable energy and keep carbon in the ground.”

Thandile Chinyavanhu, climate and energy campaigner at Greenpeace Africa, added that “for many, the climate emergency is already a matter of life or death, as homes and futures are on the line.”

“We will fight this together,” said Chinyavanhu. “We will go out on the streets, we will go to court, united for justice, and we will hold to account those whose actions have disproportionately damaged our planet. They broke it, now they have to fix it.”

At the COP26 climate summit in Glasgow late last year—a gathering held shortly after the IPCC released an earlier assessment of the climate that was deemed “code red for humanity”—world leaders promised to “revisit and strengthen” their current emissions reduction targets, which scientists and environmentalists say are not sufficiently bold to stave off climate disaster.

“We are already witnessing extreme weather events that scientists didn’t expect to see until 2100,” said Hemantha Withanage, chair of Friends of the Earth International. “After COP26’s false front of flashy announcements, this report is a stark reminder of the reality: Climate chaos is knocking at the door. System change must happen now. Real emissions reductions, real solutions, must happen now.”