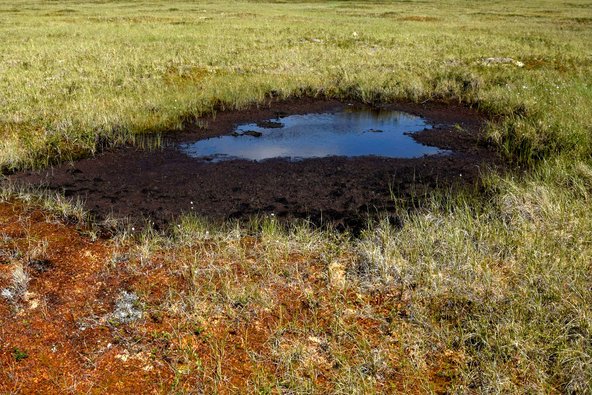 YUKON DELTA NATIONAL WILDLIFE REFUGE, Alaska — The Arctic is warming about twice as fast as other parts of the planet, and even here in sub-Arctic Alaska the rate of warming is high. Sea ice and wildlife habitat are disappearing; higher sea levels threaten coastal native villages.

But to the scientists from Woods Hole Research Center who have come here to study the effects of climate change, the most urgent is the fate of permafrost, the always-frozen ground that underlies much of the state.

Starting just a few feet below the surface and extending tens or even hundreds of feet down, it contains vast amounts of carbon in organic matter — plants that took carbon dioxide from the atmosphere centuries ago, died and froze before they could decompose. Worldwide, permafrost is thought to contain about twice as much carbon as is currently in the atmosphere.

Once this ancient organic material thaws, microbes convert some of it to carbon dioxide and methane, which can flow into the atmosphere and cause even more warming. Scientists have estimated that the process of permafrost thawing could contribute as much as 1.7 degrees Fahrenheit to global warming over the next several centuries, independent of what society does to reduce emissions from burning fossil fuels and other activities.

In Alaska, nowhere is permafrost more vulnerable than here, 350 miles south of the Arctic Circle, in a vast, largely treeless landscape formed from sediment brought down by two of the state’s biggest rivers, the Yukon and the Kuskokwim. Temperatures three feet down into the frozen ground are less than half a degree below freezing. This area could lose much of its permafrost by midcentury.

That, said Max Holmes, senior scientist and deputy director of the research center, “has all kinds of consequences both locally for this region, for the animals and the people who live here, as well as globally.”

“It’s sobering to think of this magnificent landscape and how fundamentally it can change over a relatively short time period,” he added.