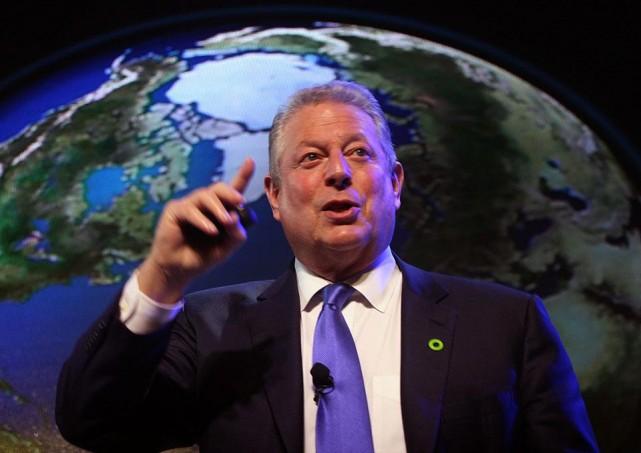 There are few subjects more reliably depressing than the problem of impending climate chaos. In some ways the daily dumpster fire that is the Trump administration is a welcome distraction from the increasingly dire predictions that describe the Hell on Earth that awaits us if we do not drastically and immediately alter our current trajectory. Climate change can be hard to look at without sinking into despair.

It is worth going to see Inconvenient Sequel: Truth to Power, however, for the same reason that it was valuable to see it’s prequel, An Inconvenient Truth, over a decade ago: Through these films we can come to understand how the liberal establishment proposes to tackle this, the mother of all capitalism’s crises.

Al Gore remains the perfect spokesperson for the liberal approach to addressing climate change. He doesn’t come off as a bad guy — he’s an affable, decent fellow with a hue of misfortune hovering about him — but he consistently reveals the essential limits of what the ruling class can imagine. His tragic aura makes him the perfect pitchman for lost causes.

Gore’s faith in our political and economic system has remained undaunted, despite the debacle of the 2000 election, when the former-Vice-President ceded the presidency to George W. Bush following a contentious battle to recount votes in Florida. Gore’s concession speech, wherein he took a stand for the “orderly transition of power,” is a terrific reminder of how dangerous a reflexive and myopic faith in “the system” can be. The same goes for Gore’s inability to imagine any truly radical response to the imminent catastrophe of climate chaos. He simply cannot see that the neoliberal logic that governs our current institutions and daily lives constrain our collective ability to address the crisis.

His imaginative/political limitations were on full display in the 2006 film. After painstakingly laying out the irrefutable case for climate change and its devastating consequences, he suggests a way out: Buy a better light bulb at Walmart. Yes, indeed ladies and gentlemen, there is hope and it’s as convenient as making better consumer choices! Gore did a masterful job of explaining the problem but his lack of vision, his lack of any deep critical thinking or analysis of power, was nakedly exposed.

More than a decade has passed since then and the seeming premise of this new film, subtitled “Truth to Power,” is that Gore will now get “political” and level with the audience. So, where does he land? Has he changed his tune?

If we are to survive as a species, the legal, economic and cultural structures that privilege private ownership of intellectual property over the interests of the many must be challenged and fought at every turn.

Gore does suggest a collective response, in addition to an individual one, but none of his suggestions fundamentally challenge the status quo. He advocates for two primary courses of action. On an individual level, he has evolved from “buy a better light bulb” to “buy yourself a solar panel” — specifically from Elon Musks’ SolarCity, a company that Gore’s investment firm,  Generation Investment Management, has a stake in. In addition to this individual action, he persuasively advocates for working on the local level, with local governments to “green the grid.”

I don’t mean to make light of this strategy. Encouraging municipalities to get their energy from renewable sources and invest in renewable energy infrastructure is one of the most important things that we can do, but it remains well within the lines that have already been drawn by our current institutions. Anyone honestly assessing the scale of the climate problem will admit that this won’t be enough. Still, credit Gore with providing at least the inkling of an idea for how we can begin to work collectively to address this crisis. That in itself is of value.

The real limitations to what Gore and his ilk are capable of imagining is revealed during the film’s coverage of the Paris climate accords of 2015. That the film depicts Gore as the behind-the-scenes saviour of the negotiations is annoying enough but it is a film about Gore after all and the filmmakers are creating a hero arc for their movie. The means by which he supposedly saved the negotiations, however, is revealing, as is the uncritical praise for the accords themselves, which most climate activists will tell you are woefully inadequate.

As the filmmakers tell it, Gore was working tirelessly to get the Indian government to sign off on the accords. He was wracking his brains, trying everything he could, when he is struck by a big idea: Persuade SolarCity to share it’s patent for a super-efficient solar cell with the Indian government. He gets on the phone with his pals, convinces them to be the “corporate heroes of the Paris agreement” and voila! India is on board. Everybody wins!

The problems with this happy ending are many. Let’s start with the simple fact that there reportedly has been no technology transfer at all up to this point. This fact certainly undermines the claim that SolarCity’s patent-sharing saved the climate talks, which was a specious claim to begin with. The bigger problem, however, is the unquestioning fealty to the premise of private intellectual property in the first place — by Gore and pretty much everyone involved in the talks. What moral justification is there for a private corporation to withhold potentially Earth-saving technology from humanity, particularly when that technology rests squarely on prior technological advances developed with public dollars? Why should it be up to SolarCity whether or not the Paris accords succeed or fail?

If we are to survive as a species, the legal, economic and cultural structures that privilege private ownership of intellectual property over the interests of the many must be challenged and fought at every turn. It must become a cornerstone of our fight for a more just and sustainable future. If we do not pull this system out by its roots, it is going to kill us all and our children.

I look forward to a sequel to this film, wherein a group of Gore’s former students finally pry from the dying, greedy hands of Big Wind and Big Solar what was never theirs to begin with and fan out across the world like modern-day Johnny Appleseeds to ensure planetary survival by redistributing the power of knowledge for everyone to use. That will be a film worth watching. It’s up to us to write it.

Photo: Al Gore has some solar panels to sell you in An Inconvenient Sequel. Credit: Participant Media.