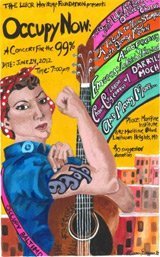 After the Evictions The U.S. Occupy Movement Struggling at the Front Lines of the Crisis

Three years after the financial meltdown of 2008, the U.S. Occupy movement opened the possibility for a left regroupment against resurgent neoliberalism. Yet the forceful eviction from the squares just two months after the movement emerged, cut short the development of such a constituting power, of a historic bloc of the “99%.” Suddenly dispossessed of the “spatial centers of its hegemonic apparatus,” it was robbed of its basis for “(counter) hegemonic practices and functions.”[1] As Jan Rehmann explains, it lost the space for the convergence and democratic, integrative practices of the diverse social forces and individuals (both organized sections of the Left, labour, social justice groups, etc.). Nor did it now have a place for its expressive practices of communal life and political education. Gone too was the space for deliberation and collaborative decision-making, as well as for developing relationships of solidarity.