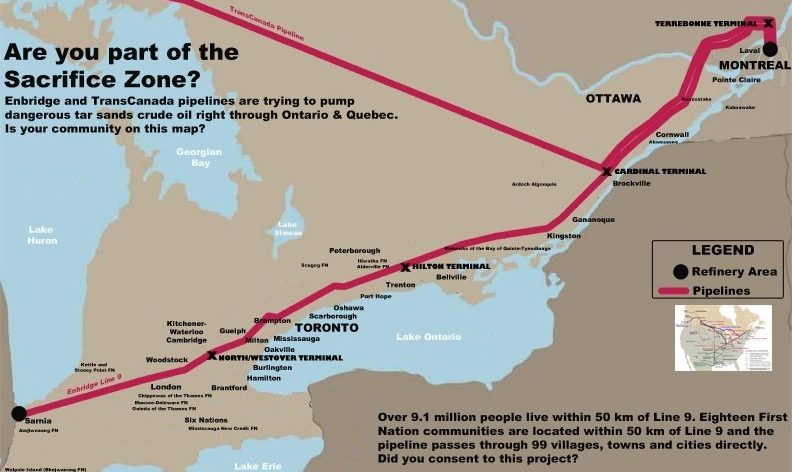 For the second time in as many weeks activists in Canada have occupied and shut down Line 9 Enbridge’s  300,000 barrel per day oil pipe line. This action effectively shuts down the flow of bitumen oil from the Alberta Tar Sands into into the United States.

The activists arrived at the Endbridge site just West of Sarnia, Ontario at 8AM and proceeded with closing the valve and locking themselves to the equipment.

Line 9 is a highly contested tar sands pipeline that began shipping crude earlier this month between Sarnia and Montreal. Those involved assert that the operation of line 9 is a violation of indigenous sovereignty and treaty rights.

“It’s clear that tar sands projects represent an ongoing cultural and environmental genocide.” Vanessa Gray asserts. “I defend the land and water because it is sacred. I have the right to defend anything that threatens my traditions and culture.” – via JustWords Media Release

Enbridge’s Line 9 puts the health of millions of people in Quebec and Ontario at risk by threatening the drinking water of numerous communities. This 40-year-old pipeline crosses multiple rivers and major watercourses, including Lake Ontario and the St. Clair River which drains from Lake Huron into Lake St Clair between the Canadian province of Ontario and the U.S. state of Michigan.

The activists are calling on oil companies and the Canadian government to stop the tar sands and end the industrialization of a vast area of Indigenous territories, forests and wetlands in northern Alberta.